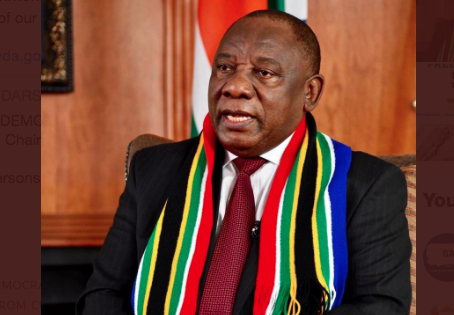 President Cyril Ramaphosa will address the nation on Sunday night to provide an update on developments in South Africa’s risk-adjusted strategy to manage the spread of Covid-19. Ramaphosa’s address is scheduled for 7 pm.

The president’s address follows recent meetings of Cabinet, the National Coronavirus Command Council, and the President’s Coordinating Council, which considered the prospects for the country’s progression from Alert Level 4 to Alert Level 3 of the national lockdown, the presidency said.

In recent days, President Ramaphosa has also held consultative meetings with the business, labour and community constituencies of the National Economic Development and Labour Council (Nedlac); leaders of political parties; traditional leaders; the leadership of interfaith communities; the South African Council of Churches and the tourism industry, which is the single largest source of employment in the private sector.

When Ramaphosa addressed the nation on May 13 he announced the government’s plans to ease the country’s lockdown restrictions to level 3 as well as the opening up of various sectors of commerce. He also announces a raft of social welfare measures to assist the neediest members of society.

Sadly, smokers who had been hoping that the ban on sales of tobacco products would be lifted were disappointed when contrary to Ramaphosa’s indications during his speech, Cogta Minister Nkosazana Dlamini Zuma announced a few days later that the ban would remain in place.

The President’s address will be broadcast live on television and radio.

0
With fuel prices set to increase sharply at midnight, many cash-strapped South Africans will be looking to fill up their vehicles, saying...
Read more
News

0
Mpumalanga police say they're searching for the man who fatally shot actress Thandeka Mdeliswa in what has been described as an act...
Read more
Politics

0
As the ANC’s National Executive Committee (NEC) prepares to meet in 10 days’ time, it is clear that the dominating dynamic in...
Read more