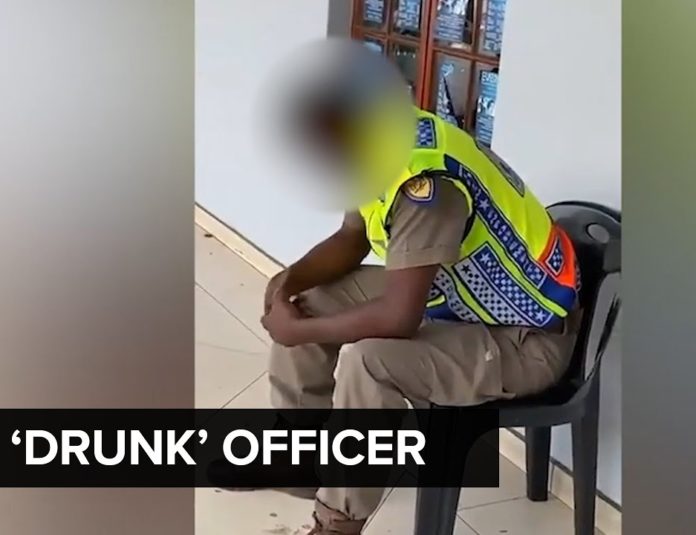 An investigation has been launched after a traffic officer, who appeared to be drunk, was filmed stumbling around a shopping centre in Lydenburg, Mpumalanga.

The owners of a hardware store captured the incident on camera after the officer wandered into their store a week ago.

“There were traffic officials and a police vehicle operating a roadblock at the corner, next to our store,” said one of the owners.

He asked to remain anonymous after he received threats for posting the video on social media.

“They were there most of the morning until about 13:00 when the official literally fell into our store,” he said.

The officer wandered down the aisle, knocking things off the shelf before he went to sleep on the floor at the back of the shop.

“We went to the officer to pick him up and that’s when we noticed the smell of alcohol. He then stood up and put his hands on a shelf to rest his head [on] and he fell asleep again,” he said.

The owner’s wife then took out her phone and filmed the incident.

“My wife said: ‘We need to film this, it’s not right,’ and then I started questioning him, asking him who he is and what he is doing.”

The footage shows the traffic officer stumbling out of the shop and down the corridor before he finds a chair to sit on.

Spokesperson for the Department of Community Safety, Security and Liaison, Moeti Mmusi, said: “He wasn’t tested so you can’t conclude that he was drunk.”

“An internal investigation is under way and we are waiting for the formal report before we continue with the appropriate measures.”

He said the incident was “regrettable”.

“Officers are supposed to uphold the law at all times, not seen to do the opposite,” Mmusi added.

The store owner said the officer was eventually picked up and the roadblock was packed up.

“We requested they do a breathalyser since they should have the means to do so, but they refused,” he alleged.

The owner did not report the incident to the police because there was no real damage to the store.