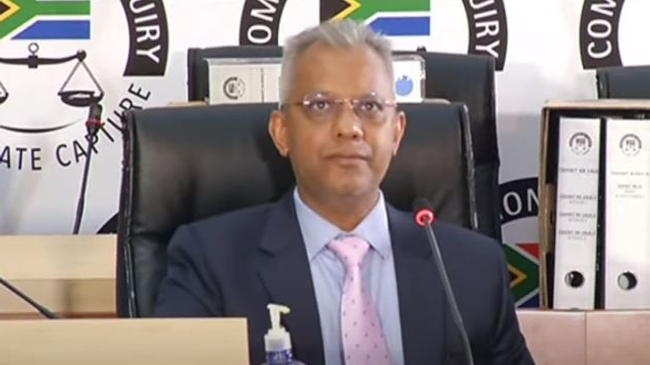 Testifying  at the Judicial Commission of Inquiry into Allegations of State Capture on Thursday, Singh admitted that he was not aware that a contract between Eskom and management consulting firm McKinsey had not been initially signed before payment was made.

Singh said he was not aware the contract was only signed in May 2016.

Evidence leader advocate Pule Seleka asked Singh to deal with the corporate plan, he asked who was appointed under the services plan to which Singh replied: “It was McKinsey and company. Singh.

Seleke then asked Singh if McKinsey needed a BEE partner, which one did they bring.

“They had engaged with Regiments and I think it was the intention to include the contract.

During that period of the Regiments and Trillion transition was occurring, “the ultimate payment  that was made  was made to Trillion”, said Singh.

Deputy Chief Justice Raymond Zondo stepped in wanting to understand why Eskom would pay a subcontractor (Trillion) instead of the contractor (McKinsey), he said it was strange to him.

“Chair, if you look at both Eskom and Transnet, they adopted a policy that enabled them to pay subcontractors directly,” said Singh.

Seleka asked Singh to cut to the chase and explain the invoice of R30.6m signed by Trillian financial director Tebogo Leballo.

Singh said the payment under services rendered in respect of the corporate plan was made.

Seleke said a couple of things he wanted to be addressed to the chairperson; one was that the contract for the corporate plan when the payment was made had not been paid by Eskom.

“If I recall well the corporate plan was delegated to former CEO Matshela Koko,” said Singh.

0
Police in Mpumalanga arrested a 27-year-old police constable for allegedly raping an 18-year-old woman in Standerton on Sunday. According...
Read more
News