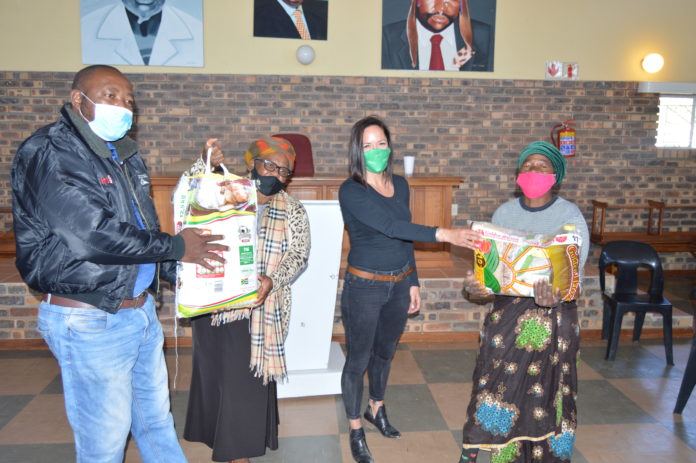 MBOMBELA: Since the President of the Republic of South Africa announced the implementation of the national lockdown onthe 23rd of March, Buscor being a company that cares for the people it serves; engaged in a partnership with Halls to lend a helping hand to needy communities through the distribution of food parcels.

Whilst addressing the beneficiaries at Gujwa, The Executive Chairperson of BuscorDr Norah Fakude said they were honoured to be giving back to the communities in honouring the late hero, Dr Nelson Mandela.

“The current situation of Covid-19 that is engulfing our country has touched us asBuscor. We felt that we should do something as the Coronavirus also affects our operation areas. We have partnered with Halls in this initiative whereby we give food parcels to communities,” said Fakude.

It is alleged that over 4000 food parcels have been distributed by Buscor and Halls since the initiative commenced.

Fakude has also condemned the women and children abuse incidents that have shown an increase in the country during the lockdown.

On behalf of all the traditional leaders of the communities that benefited from the food parcels, the Chairmain of the Local House, Chief SiveKhumalo of Gutjwa thanked Buscor and Halls for the initiative to plough back into their communities.

He indicated that the rate of unemployment still remains a major contributor of poverty in their community.

“We are very pleased with what Buscor has done for our community today. We hope it will make a huge difference to all the families involved,” added Khumalo.

0
The Mpumalanga Bubbly &Lifestyle Experience will take place on the 30thof November and the 1st of December 2019...
Read more
News

0
The Department of Health confirmed on Monday 6 July that South Africa’s cumulative COVID-19 caseload increased by 8 971 within the last...
Read more
News

0
By Sipho Maseko Mpumalanga municipalities are losing the grip in servicing their Eskom debt which is now over R8 billion from R990 million in 2016. Though...
Read more